Blogging doesn’t happen in a vacuum. Or…it doesn’t happen WELL in a vacuum. When we blog alone, we miss out on the community and the benefits of collaboration. I think that it’s vital to connect with people at or around your same level, people below you who are newer, and then also people who have a larger sphere of influence than you do. (From here on out in this post, I am referring to these people who are in that “higher” sphere as influencers.) There is a right and a wrong way to do this, so in this episode and post I’m going to share my experience in how to connect with influencers.

Listen to Create If Writing – Episode 044

How to Connect with Influencers

The biggest rule of thumb that undergirds ALL the things I’ll say about how to connect with influencers is that you need to NOT be a douchebag. I mean, seriously, you could sum all of this up with that. But since I suspect we need more practical applications for that, I’ll lay them out here.

Connect before You NEED Something
Don’t go follow someone on Twitter five minutes before you send them an email asking them to come guest post on your blog. If I like someone’s content, I’m already following them on Twitter or subscribed to their email list. I’d love already be on people’s radars (see the next point) by reaching out or starting conversations or sharing on Twitter or hitting reply on an email that meant a lot to me. Long before I try to reach out for a collaboration or anything else, that person should ALREADY know who I am. The best places for connections (I think) are Twitter and email. Maybe for you that’s Instagram and Facebook. Wherever you can make a point of connection with influencers, do it. Even if you don’t you’ll ever ask anything. CONNECT.

Give Generously without Expect Anything Back
I set up lists in Twitter via Hootsuite (see more of my Twitter practices HERE) and have lists of bloggers, social media experts, writers, and more. I try to schedule out shares and retweets of the people on those lists. Not because I want something back (though it’s always nice when you get a thanks from someone you admire), but because their content is great and I want to share great content with my people. And like the first point, don’t just share things the week you plan to reach out to someone. This is a great way to curate content that is helpful to your audience and also lets you get on the radar.

Ask in a Personal Way
A template for asking something (like when I ask people to be a guest on the podcast) can be great, but templates don’t take into account the personal. You want that person to know that this is a message for THEM. Not 100 other people. There’s nothing like getting those emails asking for me to partner with a company that has ZERO to do with my audience or content. Mention a recent blog post or something they have done that really meant a lot to you. Be personal. Show them you know who they are.

Don’t Ask for Things That Are ONLY Good for You
Influencers are busy. Chances are that your email to that person is not the only one they got that morning asking for something. Make sure you’re very clear up front what you are asking for, what that entails, and why it would benefit them. You can talk about your audience if you are asking them to be on your podcast or blog. Tell them what kinds of people they might connect with as a result. Tell them how you promote things. You can mention numbers (like how many people read your blog or listen to your podcast) or another kind of benefit, like having a small but engaged audience. Don’t ask people to give you free things if you’re creating a paid product. With the Profitable Blogging Summit, there was a paid upsell, but the Summit itself was free and I only asked for the interview. I required NO promotion of the speakers and I did my best to really promote them to my audience.

Build Relationships Rather Than Getting One YES
It’s more important to establish and maintain a relationship than getting one yes. This means that you are planning for the long run. It means you are giving back to that person and making whatever partnership you have something that has a long-term benefit to them. I’ve already been emailed back by several speakers from the Summit who saw their email lists grow or sold products directly from the summit attendees. Most of that was the fact that they shared great content, but I also made a big and intentional effort so share their content widely and well so the speakers were very visible. Rather than just having someone speak once for something, I want to treat speakers so well that they WANT to partner again.

Don’t Take No Personally
You WILL get nos. I hear them all the time. If you don’t hear back at first, hit reply to the email you sent that person (so they’ll get a Re:Subject email) and give a short bump asking if they’ve had a chance to think about it. Don’t reach out more than that, but do give them a week to respond and then try the reply. After that, let it go. If they say no, it isn’t the end of the world and doesn’t mean that you can’t reach out again. You can sometimes get the tone from the email that maybe they are not interested at all, but you can maybe keep that door open by thanking them for their time and responding politely. Then keep on sharing their content the way you were and keeping those points of connection. Maybe the next time you’ll get a yes.

Don’t Leave People in the Dust
If someone collaborates with you, make sure you follow up. THANK THEM. Share a lot. Tag them. Make your content work for them to bring good things back to them. We all know those people who use people and then leave you in the dust. I HATE THAT. Everyone hates that. And word gets around in the blogging world. Be grateful, be generous, give back to the people who give you their time. Don’t build your platform on the backs of other people. That’s gross. 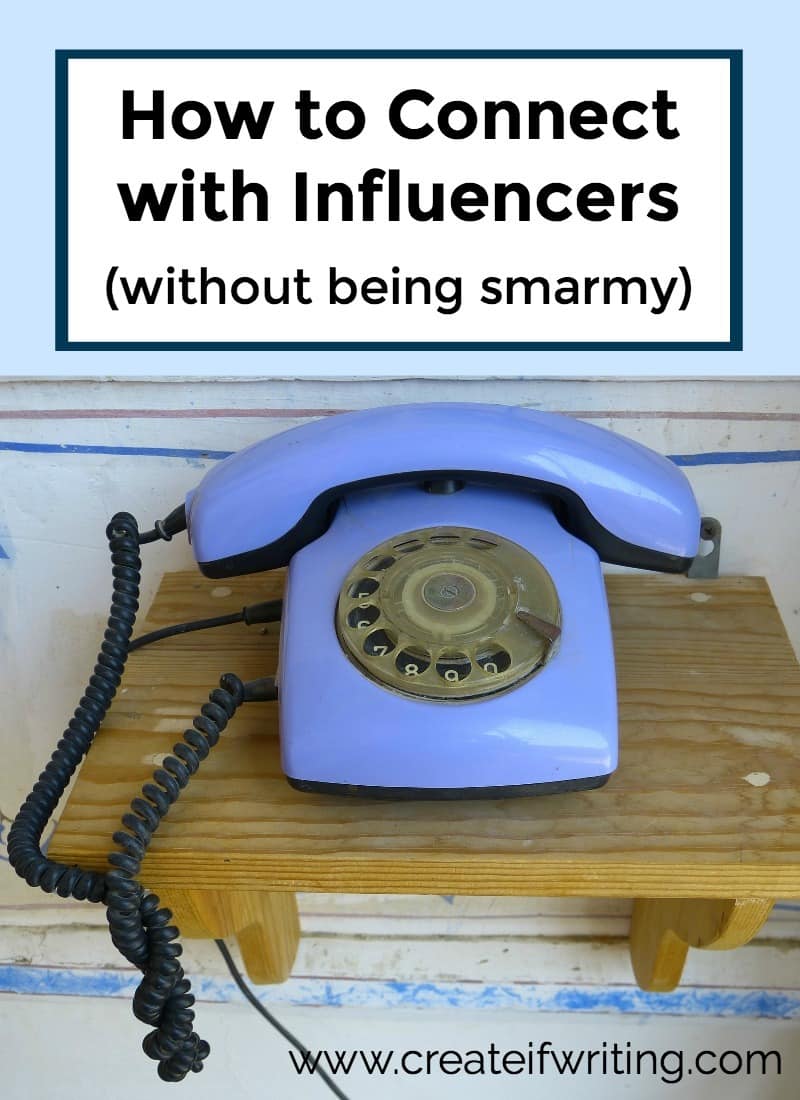 My favorite ways to connect are through Twitter, which I think really does make the world small. It allows you to reach influencers and people you might not otherwise reach. Many people don’t think about Twitter much because they don’t get a lot of traffic from it. Twitter, for me, is all about connection. Follow people you respect. Share their content. Hit reply to a Tweet and start conversations. Be engaged and you will find your engagement grow. (Again, this post outlines how I use Twitter.)

I also love to connect through email. Email is usually the best way to REALLY connect with people. I love to hit reply on an email that means something to me. Often that person will be on the other side and hit reply. I’ve established relationships with readers and turned a casual reader into a raving fan by responding to people who respond to my email. We have a conversation. It’s private, not in some social media space. It’s a very intimate way to connect and can really make a connection you might not otherwise make. (Need email help? Take my free course!)

Overall, treat people like people. Don’t be a douchebag. Give before you ask and give MORE than you ask. If you are doing these very practical things, you are likely to create a fabulous network of real, authentic connections on the internet with influencers great and small!

Do you have any tips or experience with how to connect with influencers? Leave a comment to let me know below!