This is another post in a series on email lists and email marketing! If you want to see my full resource page on email, you can see that HERE. Today it’s all about the Facebook messenger bots.

Every few months a new platform jumps onto the scene that gets tons of buzz. Some of these make a splash, then seem to lose steam (heyyyy, Snapchat), while others just keep building. One of the latest trends is the use of Facebook messenger bots. I’ve heard many people say that Facebook messenger bots are the new email. 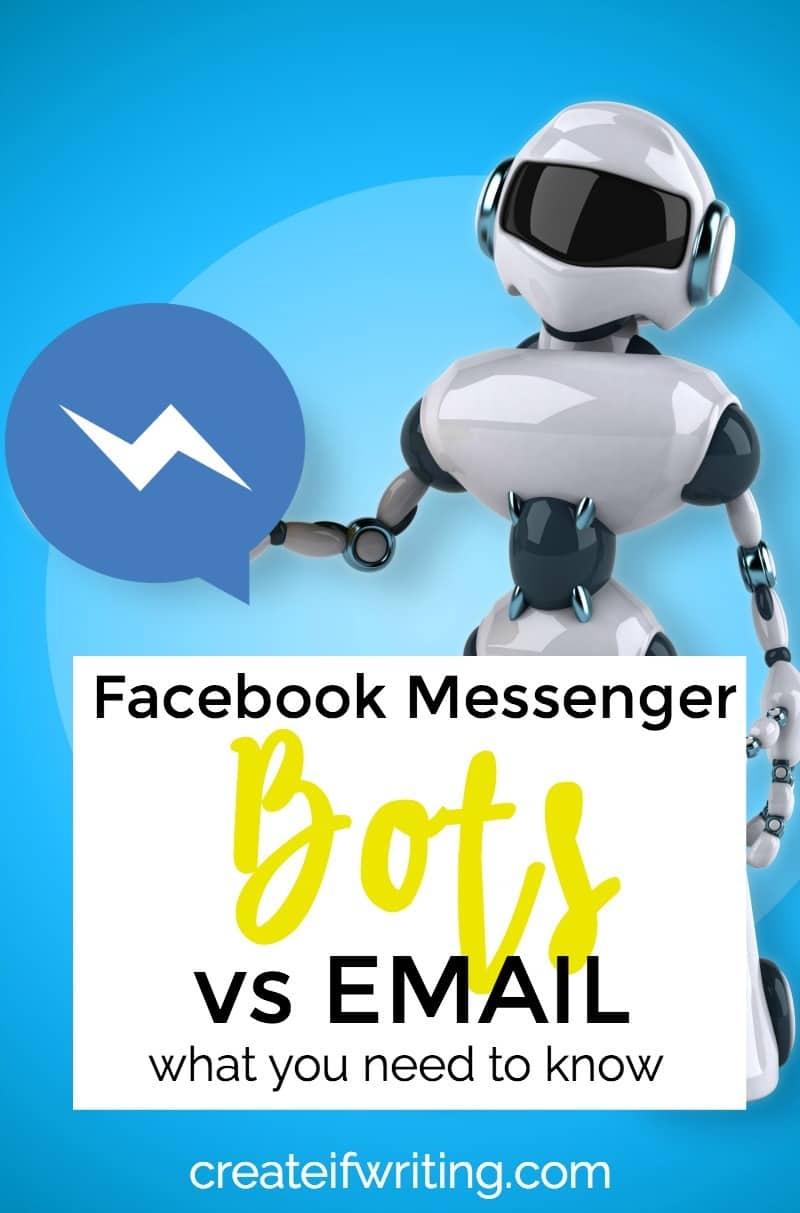 Bots preceded this development and are essentially automated messages you can use to “talk” to people through your page. (Personally? I need one because I almost never see messages sent to my page.) You can set up how the bots work and what they’ll say. (Here’s a great tutorial from the Social Media Examiner.)

How Facebook messenger bots are being used right now?

Facebook recently introduced a new aspect to Facebook ads. You can choose to target people through Facebook messenger. Which sounds…terrifying. I’m getting enough unsolicited email every day–I definitely don’t want that popping up every time I open Facebook!!

Thankfully there are some protections in place for this. You have to opt into these kinds of ads by either messaging the page at some point or by allowing something (like a freebie) to be delivered via Facebook messenger.

Do you have to be using Facebook ads to use bots?

NO. You can set up bots with a free service like ManyChat to have an automated reply (for anyone like me who forgets to check my page messages…) or to message people about new blog, Youtube, podcast, or other content. Check out this detailed tutorial from *Owen Video. He’s using it for YouTube, but you can do this for other options.

I just set one up for my podcast! Want to know when I have new podcast episodes? Click here to receive those notifications via Facebook messenger and meet the Kiki Bot.

If you have an email list, you know that open rates are NOT 100%. It varies across different industries and also according to list size, but 20% is kind of a benchmark GOOD open rate. Clickthrough rates are something like 3-5%.

Facebook messenger bots? Can have open rates of 80-90% and click through rates of above 50%. THAT’S INSANE. So of course people are jumping on this bot boat. That’s amazing engagement! Right?

While those stats are SUPER impressive and beat out even the open rates for free challenges (which I’ve found have between 60-80% open rates), they may not be exactly what they seem.

Remember when Facebook admitted that it hadn’t been measuring video metrics correctly, but still bragged about all the great stats? Yeah. That happened.

I also know that when I have Facebook open, messages pop up right there as a chat, whether I click to open them or not. If that counts as an “open” for messenger ads, then it’s no wonder that the open rate is so high! I also wonder how clicks are actually measured and how trustworthy these stats are.

Then again, those numbers are still huge. And we KNOW people are on Facebook constantly. Plus, messenger has not (until now) been a market-y place. So people may engage there the way they engage with friends: easily. Quickly. Without hesitation.

I’ve played around with Manychat (an app for creating bot messages) and subscribed to a few bot opt-ins to get a feel for them.

My biggest qualm with these bots is that people don’t fully understand that they are opting into something. Unlike email, where there are laws and regulations that mean we have to be super clear and often use a double opt in (where people have to enter their email address AND click to confirm in an email afterward), messenger bots are regulated by Facebook.

Right now the regulations in place ensure that a page cannot opt you in without you first messaging the page (which still to ME is not permission to opt into some kind of ad sequence via messenger). I also find that it’s not as easy to unsubscribe. Usually one of the first messages tells you that you can type “stop” to stop. But if you don’t remember this and aren’t reminded, there isn’t an easy one-click unsubscribe as with email.

Some people will see that as a plus because they’ve essentially got a captive audience. But I’d rather have an audience that WANTS to be there. Not one that’s there because they can’t figure out how to leave.

Why you shouldn’t discount email

No matter what new things come along, email has a few big advantages over basically everything. The first is that email isn’t going anywhere and almost everyone has it. It’s a way of life and way more established than any other social platform.

While you can see your Facebook “subscribers” if you’re using a tool like Manychat, I haven’t seen a way to download a spreadsheet of emails the way that you can with an email list. Which means that your contacts are still in that app. Unlike email, where you can actually print them out and hold them in your hand. Your email list is YOURS. Your bot subscribers are friends you have permission to visit from Facebook. Until you don’t.

Messenger bots are so new that we don’t really know what will happen next.

With anything new, you could become an early adopter and see a lot of traction before the whole thing becomes overdone. Starting early can be a great way to carve out your own unique space and become an expert in a growing field.

The downside, of course, is when those platforms DON’T take off, or if you build on a platform that then changes and leaves you in the dust.

Which is one more reason I’ll ALWAYS recommend pairing whatever it is you do — messenger bots or something else — with growing your email list.

Your potential audience may be slow to adapt as well, which is something to keep in mind. When I’ve asked my own group, they are almost ALL totally opposed to and grossed out by this idea. A few signed up for these bot messages for someone’s launch and they hated it. So you also risk really ticking people off.

But this reminds me of the whole pop-up debate. Everyone says they HATE pop-ups. And yet…research shows that they work.

If you want to know more about setting up messenger bots and ads, you can check out Manychat (which has great tutorials about bots), this great post and interview from Social Media Examiner, this post from Jon Loomer about setting up ads so that people end up in your messenger “funnel,” and Amy Porterfield’s interview with Rick Mulready about messenger ads.

Ultimately, YOU need to decide how you to connect with your ideal audience. But I would urge you not to jump ship on email for the next shiny thing. I could insert a bunch of tired metaphors here about things that glitter…but I think you get the point.

Thoughts on bots? Will YOU use them? Have you experienced them? Let’s discuss in the comments.