This post is going to dive into how to get the most out of free book promotions or 99-cent sales (which will include KDP countdown deals). You’ll walk away with a better idea of the strategy behind these kinds of promotions!

But just making a book free or running a sale is NOT ENOUGH. There are so many free books and books on sale in the various retailers that you really need to have a strategy behind making this choice and a promotional plan in place. 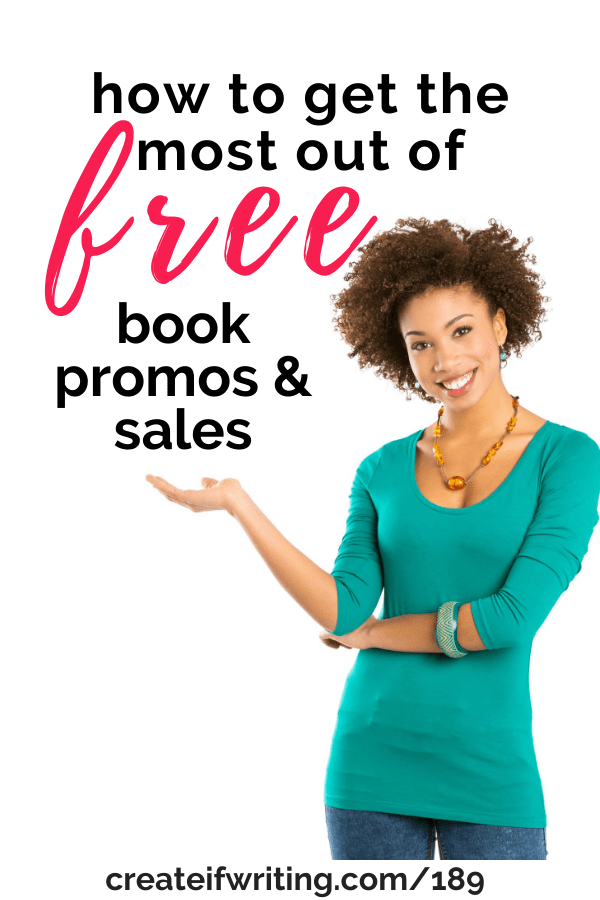 YOUR WHY BEHIND THE PROMOTION

Discoverability – A free promotion or sale is a great way to introduce new readers to you and your books. Both can help your book go up in the ranks to be more visible on retailers as well.

Sales – Free promotions and sales often have the added effect of selling more of that book.

KU Page Reads – If your book is in Kindle Select, that means readers who have the Kindle Unlimited subscription service can choose to borrow your book rather than pick it up and “buy” it for free or 99 cents. So you can see increases in page reads (which you still get paid for) if someone checks it out on KU rather than buying.

Boosting overall sales – These promos and sales can help hook the readers into a longer series and help the sales of your backlist.

WHEN YOU SHOULDN’T RUN A FREE BOOK PROMOTION

I found out the hard way that free book promotions aren’t that helpful without more books in the series or in your backlist. (To be clear on those terms–I mean other books in that same series when I mention series, and when I talk about backlist, I’m talking about other unrelated books you’ve written.)

There are tons of freebie-seekers out there. Often they’ll stockpile books and won’t read them. This doesn’t help with discoverability, as they may not ever “discover” you. Which means that while free is great for finding new readers, it’s not a magic cure-all. And if they DO love you, but you have no other books, they might totally forget about you before your next books come out.

Without having other books in a series or a larger backlist, there’s no solid way to recoup the cost of your promotions. (I’m going to talk about investing money in a moment.) With a series and a backlist, you’ll have other books people can buy to help offset any advertising costs.

As I’ve mentioned, there are tons of books for free at any given time on any given retailer. If you don’t do something to boost the visibility of your free or sale book, you’re not likely to reach any of your goals.

With a few paid promotions, your book can go from a dozen downloads to thousands, which puts your book on more readers’ devices and will help you achieve those goals. I’ve also found that I make more sales the days following a free promo, likely due to people opening the emails from the promo sites a few days later and picking up your book when it’s no longer on sale or free.

The following screenshot shows my income for December 2018. That big spike in sales? That was the day AFTER my free promotion where I paid under $150 in promos. I made $340 the next day.

(Note: This was one of the highest day-after sales I’ve had, but many of my free months look like this on the graph. To do well, your book also has to be on point for the genre in terms of the cover and blurb.)

While it seems counterintuitive to PAY for promotions on a cheap or free book, I’ll often more than make my money back on the next day or few days with that book or within the series or my backlist. Without promotions, your book won’t be found, won’t be downloaded, and it’s really going to feel like a waste.

WHERE SHOULD YOU PROMOTE YOUR FREE/SALE BOOKS?

I don’t have a cultivated list here, but there are some great other sites that compile effective sites for promotion. Check out:

One tool I really like is called KDROI. It’s by the maker of KDSPY, which I also loves, and is a chrome extension that lets you go onto your book’s page on Amazon, click a button, and submit your free or 99 cent deal automatically to sites that have a listing for free.

I’m an affiliate for this program, which you can snag for under $50: GET KDROI!

Below is a screenshot of what it looks like in action. A few clicks and BOOM. It will submit to a number of sites all on its own. 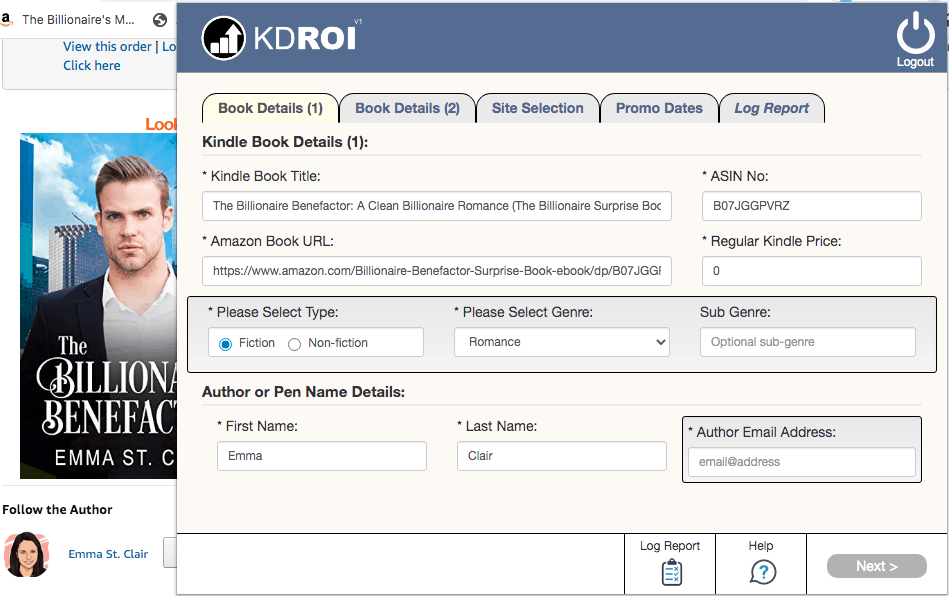 I would highly recommend making a spreadsheet to track your free days and promotions, especially as you’re testing out which sites have the best results and work best for your genre.

WHAT PROMOTION SITES TO AVOID

As a note, I almost NEVER pay to promote books with sites that only do social media shares. Overall, email sells books. Social media typically… doesn’t.

Sometimes I’ll check these sites who email me bragging about their 200k Twitter followers and how they’ll tweet my book 400 times. I click on the books they’re promoting on Twitter and check the rank. I’m NEVER impressed. So, I only pay for sites that send emails.

It’s also wise to check Facebook groups you’re in to see if they have a curated list or to ask other authors in your genre which sites work best for them. It’s not always the same across the board.

OTHER WAYS TO PROMOTE

If you don’t have tons of money to dedicate to a promotion, consider working with other authors. You can all email for each other on the same day, or set up a sales page on a website or through Bookfunnel or Story Origin for a limited time with all the books.

You can ask for authors to swap with you on the dates of a sale, just as you would ask for swaps with a new release. Or, you can set up a Facebook group swap with other authors. If they post for you in their author groups on the date of your promo, you can swap back and do the same for them when they have a sale or promo.

There are thousands of FB groups that allow promotion. Most of these are what I like to call link graveyards where authors drop links to die, but some are legit reader groups where people are looking for books to read. Create a nifty graphic for your free promo. Post in those groups. It doesn’t cost anything but time, though the effectiveness may not be fantastic.

These are still great tools, though I’ve seen the effectiveness wane as I’ve been around longer. Why? Back in 2018, I was new. My books hadn’t been seen or read by tons of people, so it may have been more of a novelty. Now, readers may already have purchased my books. Some of them have already been free once before.

I tend to run some kind of sale or promotion every month of the year because I have a big backlist. I’m either releasing a new book, putting a book up for free, or running a sale. Possibly a combination. All of these activities keep your books moving and selling, which keeps them alive and continues to sell your backlist.

Don’t be afraid to run sales, and if you’re concerned about the perceived value of your books, think of the long game. One free book could bring you thousands of new readers who buy more and more of your books. It’s definitely a strategy worth trying, as long as it’s part of a strategy and you have a plan for promotion.