Some of you may have already heard this advice passed down, especially from indie authors. Others of you might be scratching your heads. Why wouldn’t you want to promote your book? Isn’t every book a special snowflake that deserves all the love we can give it?

I want to clarify before I dive too deep that I’m mostly talking paid promos and GIANT promotions that take tons of your time, effort, and calling in favors from other people.

Books won’t generally sell if you just upload them to Amazon. Even if you have great keywords and all the things. We aren’t living in the “if you build it, they will come” era. So, don’t mistake this post to mean that I don’t believe in promotion or that you can sell books without promoting.

I really want to save you money. So this post is for you guys trying to decide when to INVEST in paid promotions for your books.

(And when it comes to paid promotions for your books, you can read this post.)

WHEN YOU SHOULD PROMOTE YOUR FIRST FICTION BOOK

If it’s your first book ever and it IS in a series, yes… promote. But maybe don’t pay as much until you figure out what you’re doing.

If you are publishing on a more traditional publishing schedule of like once a year or something, also yes! Promote.

You might want to wait to promote your first book if…

…you’re totally new to all this.

…it’s part of a series that has to be read in order.

First of all, I often recommend bootstrapping and starting slow. If you think that you’re going to write multiple books, not just the one, it’s a learning experience. You’ll get better at writing and you’ll get better at promoting and basically all the things. It can be helpful to wait on your spending until you know what you’re doing.

I’ve seen posts from authors who spent hundreds and thousands on books that didn’t ever bring in that return. In some ways, a first book is testing a concept. Can you write? Do people want to read what you’re writing? Are you writing in a niche that sells?

Secondly, if you’re writing a series, you might consider waiting to promote the first book until you’ve got the second one either published or on preorder. Why? Because then when you promote the first book, you are more likely to make more money because if you’ve done a good job hooking readers, they will read through to your next books. The money you spend on promotions will have more ROI because you have more books to buy.

Lastly, if you are releasing books more quickly, it can make more sense to wait. When you’re on a more traditional publishing schedule where you release once a year, this idea of waiting to promote would be crazy. You might promote AGAIN with the second book coming out, but waiting a really long time is silly.

If you’re writing a book a month or every two months, you could more easily wait to invest money in promotions when you have more books to buy. With my first two books, I got way less ROI when I paid for promotions. I sold some of those two books. The end. Now that I have something like ten books, I see a bump in ALL sales (especially other books in the series) when I promote one.

LISTEN TO EPISODE 164 – SHOULD YOU PROMOTE YOUR FIRST FICTION BOOK? 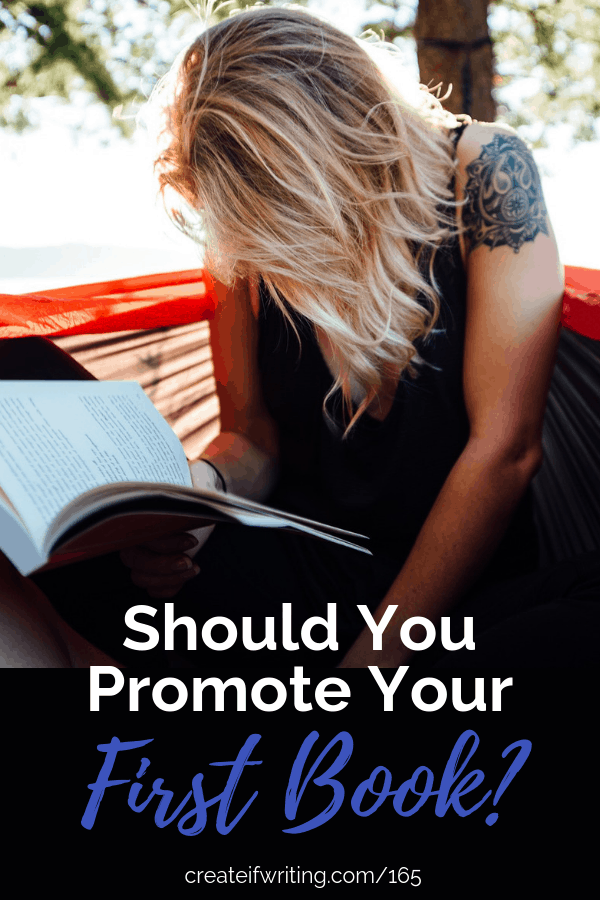 SHOULD YOU PROMOTE YOUR FIRST NONFICTION BOOK?

The answer here is a little bit (maybe a LOT) different. I feel like there is a vast difference in how promotion looks for fiction and nonfiction. I’ve found WAY more free options for promoting nonfiction books.

Well, nonfiction books (other than creative nonfiction, like memoirs) often contain information that can be parsed out and packaged into other content. For example: I have a book on email lists. I have written a TON of content on this blog on email. (Find that here.) Many of the posts allow me to link to the paid book. I can also write guest posts where I gain authority and promote the book on email. I’ve heard tons of people go on podcasts to talk about the topic they wrote about in their nonfiction book.

You can also use your nonfiction books as a sales funnel. I could use my book on email lists to sell a course (which I used to do, but don’t anymore). Or coaching packages (which I also don’t currently do). Your $4.99 nonfiction book could help sell your bigger-ticket items.

All that being said, your nonfiction book may be serving other purposes than just making money in and of itself. That makes the promotional aspect a little different ballgame.

Readers also don’t read nonfiction in the same way. They might read a how-to book on a topic they’re interested in, but they aren’t necessarily going to go buy ALL of that author’s other how-to books. They’ll buy if they’re interested in that topic, whereas in fiction, if readers like that writer’s story, they’ll want more of that AUTHOR.

In case you missed it, YES YES YES YES YES promote your first nonfiction book. Yes. But before you dump in a bunch of money, realize also that you have a ton of other kinds of opportunities to promote that book for FREE by guest posting and going on podcasts.

LISTEN TO EPISODE 165 – SHOULD YOU PROMOTE YOUR FIRST NONFICTION BOOK