Everyone’s saying go audio: should you? The buzz is all about audiobooks. The audio boom. Audio is the future. But are audiobooks for everyone? Let’s find out by diving deep into the reality of audiobooks in 2020.

LISTEN TO EPISODE 183 – STARTING OUT WITH AUDIOBOOKS

SHOULD YOU AUDIO? THE SKINNY ON AUDIOBOOKS IN 2020.

Why is everyone talking about audiobooks? Simple. Audio is growing. People are consuming more things by audio, from podcasts to audiobooks.

Even if YOU DON’T, other people ARE.

I’m going to link to more articles with data, but suffice to say that the US market alone has been increasing in audiobook consumption 25% per year, with a 40% increase in 2018. It’s alive, and it’s growing. (Those numbers come from the first link below.)

It seems like a no-brainer answer to say that YES, you should be putting your books into audio form.

Not so fast. Let’s look at the current landscape and some of the struggles for indie authors wanting to get their books into audio.

EBOOK VS AUDIOBOOK : THE DIFFERENCES IN COST

For an indie author to produce an ebook, you essentially need a file formatted (cost: free to several hundred if you’re getting super fancy and adding custom graphics), a cover (cost: $50-thousands), editing (cost: a few hundred and up) and …uh…. that’s it.

So, if you’re bootstrapping and go low low low, you could put out a book for maybe a few hundred dollars. My first book had a $20 cover (that was great and to-market), $200 editing, and free formatting. So, $220.

For an indie author to produce an audiobook, you’ll need a narrator (typically $100/per finished hour and up), an audio editor (which may or may not be included with the narrator), and audio cover art (may be included with your cover, but usually $25-50 and up as an add-on).

I just had my first fiction book put into audio, and the cost was over $1300 out of pocket up front. GULP. My narrator was $150/per finished hour, including editing. I hired someone to listen while reading the book to make sure the narration matched ($100), and then I paid for cover art ($25). That total is $1375.

Other factors at play…

Are you seeing the writing on the wall?

I’ll make this a little more clear. For my ebook, Managing the Rock Star, when I released it, it took about ten days to break even and cover my costs. By the second month, I’d made (gross) about $2k. Knowing my ad spend back then, that was likely a $1400-1500 net profit.

Managing the Rock Star as an audiobook has sold eight copies in its first week. I’m not exclusive, so at a $13.96 price point, that’s about $3.50 time eight copies. So, just under $30.

I’m not sure what to expect, but this was my launch week, so that might be high. I’m also learning audiobook marketing, so it’s hard to say. 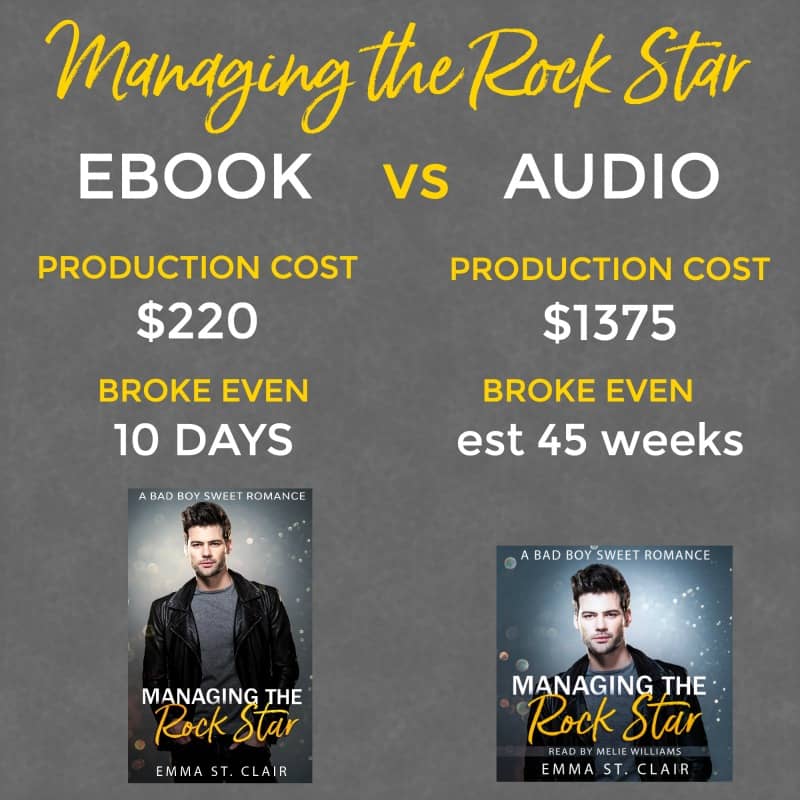 EBOOK VS AUDIOBOOK : THE DIFFERENCES IN PRODUCTION

We’ve looked at price, but how about production?

If I REALLY wanted to completely DIY my ebook, I could self-edit and design my own cover. Or, at the VERY least, format for free just using word or Draft2Digital’s free formatting tools.

I really would NOT recommend DIY-ing an audiobook. I see some authors doing this, but let me give you my reasons why you might want to think twice.

ACX (the main, but not only, distribution platform) has quality controls. You need to have your audio files up to their very specific standards. And that’s AFTER you already need to know how to edit audio in general.

Oh, AND audiobooks are not just books someone reads out loud. They are narrated. Fiction, especially, is done by voice actors, who really know how to do a bit of a shift with voices for characters and how to read really well for dramatic effect.

In short: audiobook production by the average author will have a HUGE learning curve and may not end up with a product that stands up alongside professionally produced audiobooks narrated by voice actors. (I will say that for nonfiction, self-narration is much more of an option!)

When you take both cost and production into account, ebooks allow indie authors much more control and will have a much quicker return on investment. Audiobooks will cost more to produce and are more of a long game in terms of breaking even more making money.

Audiobooks may be worth the investment in the long run. But for the indie author on a budget just starting out, this might be out of reach. Or something to work toward.

Realize that audiobooks are a LONG GAME, not a QUICK WIN.

Okay, but hang on! I’ve heard authors talking about how they’ve made money quickly with audiobooks and promo codes. What about royalty share with a narrator as a way to lower the cost?

ACX is the audiobook company for Audible, owned by Amazon. Right now, they are the big dog, and Audible is the most well-known audiobook app.

EXCLUSIVE VS NON-EXCLUSIVE WITH ACX

If you distribute EXCLUSIVELY with ACX to Audible, you are locked into a SEVEN YEAR contract and will receive 40% of your royalties per title sold. (If you would like to come out of exclusivity after one year, the word is that you can ask to be released. As of right now, that works. I can’t speak for tomorrow.)

When you produce your audiobook, you can either hire a narrator and pay them directly per finished audio hour, or you can do a royalty share with a narrator. A royalty share means that you and the narrator split the 40% royalty. It also means you HAVE to be exclusive with ACX. It also keeps you from having up front costs.

Before now, if you were exclusive with ACX, you would be able to get 100 free codes to provide listeners. They would redeem the code, get to listen (and hopefully review) for FREE, but you also GOT PAID AS THOUGH A PURCHASE HAD BEEN MADE.

Does this sound too good to be true? It was.

Audible benefitted from this, because it got and kept listeners on their platform. It also enticed authors to list their books exclusively. In April, with zero warning, ACX announced that it would no longer provide payment for codes AND the number of free codes for review would now be limited to twenty-five, with the ability to unlock twenty-five more free codes after you made one hundred sales and at least ten of the original twenty-five codes have been redeemed.

What does this mean?

It means that authors who were using the promo codes to offset costs can no longer do so. It also means that narrators (who also received codes) no longer have this option to help them earn royalties and offset the cost of their time to produce a royalty-share audiobook. Narrators may be way less likely to want to do royalty-share now.

Why did this happen?

In short, ACX blames scammers. I won’t name names, as honestly, I didn’t dig, but apparently, some shady people were doing shady things like creating terrible audiobooks just for codes and then having those codes redeemed in shady ways to get the money for the free codes. Oh, and then they taught other authors to do the same.

For me, these codes were the whole reason I planned to go exclusive. I hoped to use the codes to help garner reviews on my audiobook and offset the big up-front cost I paid. This change happened while my book was in production, so I changed my audiobook to be non-exclusive and I plan to distribute as well through Findaway Voices.

As we know with Amazon– they give, and they take away. It’s totally their right to take away a too-good-to-be-true free code promotion thing. It stinks that they did it so suddenly, rather than letting authors know ahead of time. Honestly, I wouldn’t have invested $1375 up front if I knew this would happen. That was a massive part of my plan for ROI.

But really, I never wanted to be exclusive with ACX. I hate the seven-year contract. So much can happen in seven years in terms of tech and audio advancement, not to mention other apps or another company making big headway in audiobooks.

I believe that after this change, more authors than ever will choose to be wide.

CONCLUSION ON WHAT YOU NEED TO KNOW ABOUT AUDIOBOOKS IN 2020

If I sound like I’m trying to dissuade you from doing audio, I’m not. The stats don’t lie. Audiobooks are booming. They are growing and continuing to do so.

On the flip side, they are much more costly to produce and much less likely to earn your money back in a timely way. And with the recent ACX changes, it might be even harder to earn back your investment or to offset costs with royalty-share.

Audiobooks are a long game strategy. Not a quick win.

Should you invest? If you have the money to invest and the ability to be patient AND to invest time in marketing strategies for audiobooks, then YES. Yes, you should.

If you are just starting out and aren’t making a lot of money or seeing a lot of sales with your books, you might not want to put your eggs in the audio basket just yet. You may need to work on building up your audience first, honing your craft to write addictive books, or save up.

DEFINITELY do not invest if you are having trouble marketing your ebook. If your ebook isn’t selling, you need to stop first and examine why rather than investing more money.

I hope that this honest look isn’t discouraging, but rather informs your decision on whether or not you should invest in audiobooks, and what you need when you’re ready to get started.

Below are a few more links on audiobooks, but you can also hear directly from narrator and author Lorana Hoopes if you sign up for the FREE Stay Home Story Summit happening this May.

Find out more about the free Summit HERE. 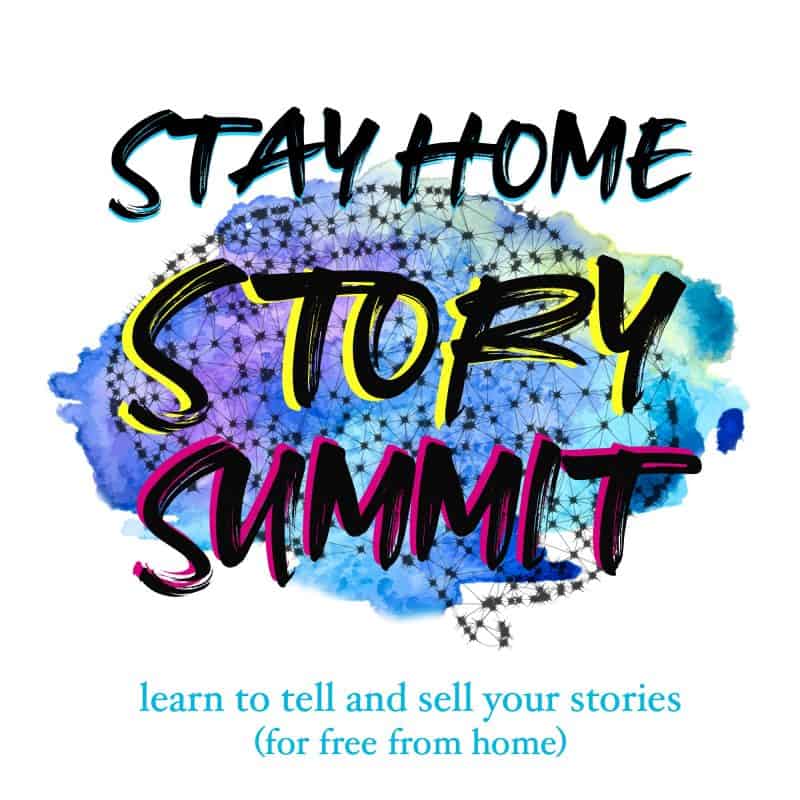