Listen to this week’s episode (or just keep reading).

Episode 95 – When to Break the Rules

When to Break the Rules

You may have heard this famous quote: “Learn the rules like a pro so you can break them like an artist.”

Note: This is often incorrectly attributed to the Dalai Lama and possibly came from Picasso, but there is wide debate here too. If you want to fall down the rabbit hole and get back to me with the truth, have fun! I spent way too long digging.

Or perhaps this variation: Learn the rules well so you can break them effectively.”

No matter who actually said this, I love the principle behind it. You see, there is good reason to learn the rules and the best practices. Grammar and punctuation rules, for example, generally help you communicate more effectively. (Though in some cases if we are being honest,  the rules are just weird and dumb.) 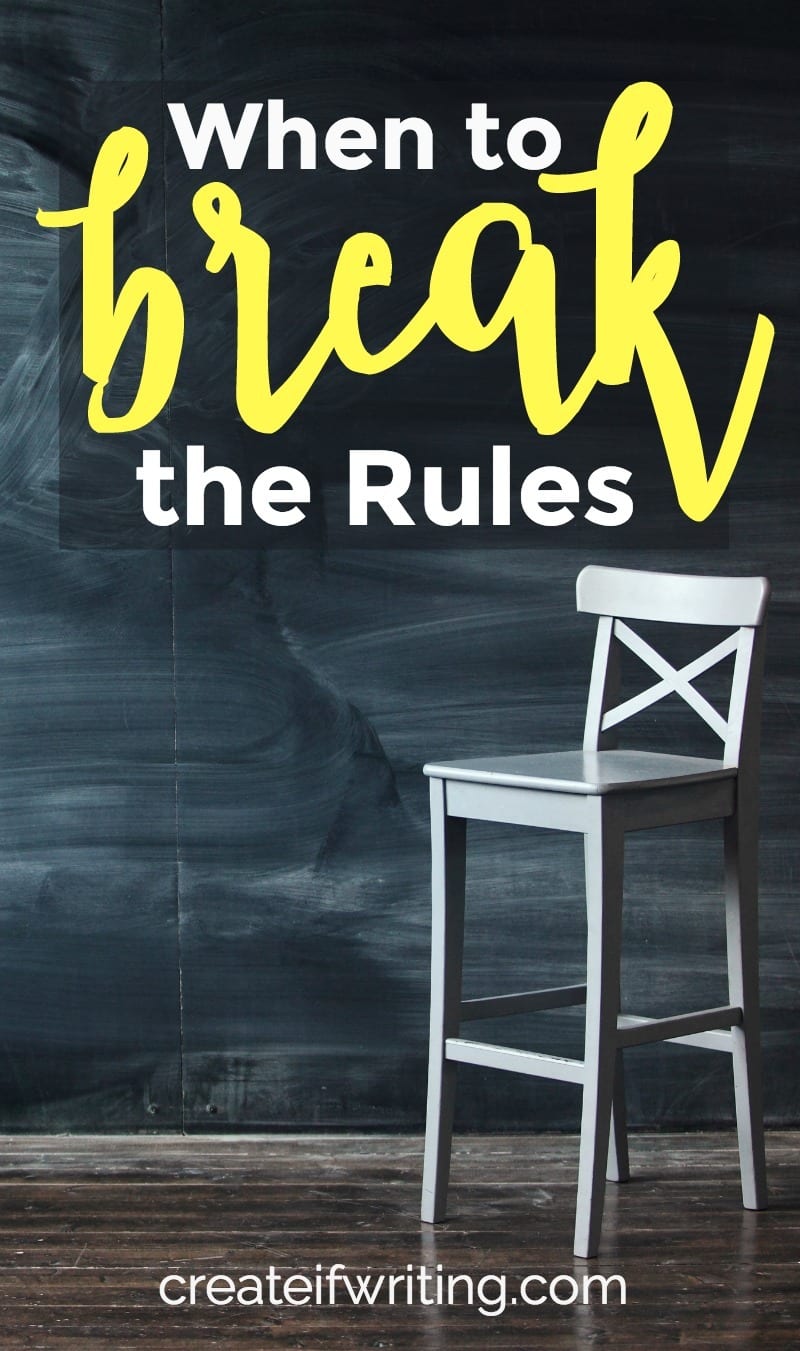 Let’s take a rule that came into being in the age of the manual typewriter: the double space after a period.

Before some of your heads fall off (I know you, single spacers!) there was a very real reason. Because of monspaced typefaces that came in with the manual typewriter, double spaces after a period made things easier to read. (Read more about that in this article.) If you took typing in the 90s, you may have learned this habit, as I did.

And just like the rest of the QWERTY keyboard, this stuck. Except even in the 1990s, the double-space was being phased out. But not everyone got the memo, including me. No one even told me in grad school (I graduated in ’07) that this was no longer a Thing.

This double-spaced rule replaced the single-spaced rule for a purpose and then, when the purpose (monospaced typefaces) went away, so did the rule. (Which really seems more like a temporary concession in the grand scheme of history.)

Rules generally have a function. It is good to know them. Because if you don’t abide by those rules and conventions, it can make you appear uneducated or lazy. Especially in writing.

WHY BEST PRACTICES ARE BEST…MOSTLY

Best practices are similar to rules, with a lot more flex.

For example, if you’re selling a course or doing a launch for a book or product, scarcity and urgency are best practices to get people to buy. People are motivated to act by these things. But these are not RULES like a single space after a period.

The best practices are great to learn because they give you a framework and can help you plan a strategy. (Like my Seriously Simple Social Guide, which helps you know the best practices for common social media platforms.) It looks silly to use a bunch of hashtags on Facebook (unless they are for humor’s sake #irony) whereas that’s a normal thing on Instagram.

Like rules, following best practices often results in the best outcome. You may be more effective and find better results. There is a reason that they are BEST. But that is also a general statement. Not an absolute one.

WHEN YOU SHOULD BREAK THE RULES & BEST PRACTICES

Knowing rules or best practices allows you more freedom to disregard both in favor of something that works best for YOU.

It makes breaking the rules an intentional choice for a purpose, not an accident. (Or, like me and the double space, ignorance.)

You may know the rule that all caps is basically wrong. But choose to do it anyway in order to establish your writing voice. OR TO SHOUT AT PEOPLE. Or both.

It may help you to know that countdown timers exist and that many people recommend putting them in emails when you are trying to create urgency. But choosing not to use them because they make you feel gross to you establishes how you sell to your people.

You should always break the rules and discount the best practices when they go against YOU. It should be intentional and purposeful and say something about how you operate, stylistically or even ethically. I’ve gone with best practices at times, even when something didn’t sit right. Every time, I ended up discarding it and going with my gut instead.

HOW TO BREAK THE RULES WELL

When you make a stylistic choice.

Some writers establish their voice by using all caps. Yep, even in a book. (But mostly online.) All caps are generally regarded as shouting or just not how you write. But for some writers, the all caps established their voice.

When you feel icky about it.

This is not so much related to grammar as it is things like sales. I have a post brewing in my head about not just doing things because you CAN. Content upgrades may be super effective, but if it feels gross to you to ask for an email address, DON’T DO IT.

When you want to stand out.

Sometimes you might want to stand against the norm for the sake of disruption. You may stand out from the crowd if everyone is zigging left and you zag right. Disruption happens. Your choice to go down the up escalator may not work out so well, but it also could be the first step in a niche-wide disruption. An example might be that everyone says creating online courses is the thing, but you choose a totally different business model.

Know the rules and best practices. And if you choose to disregard them, do so intentionally and with a strategy in mind.

Some other great reads:

Thoughts, my rule-breakers? (Or non-rule-breakers– you guys can speak up too.) Let me know in the comments!