Writers don’t write in a vacuum. Or…they SHOULDN’T. Writers need writing groups and communities of other writers to help support, teach, encourage, and promote. We need each other! Keep reading to find the why and the how.

Okay, let me qualify that. Successful writers may write alone, but they don’t WORK alone. They have writing groups and writing communities, both online and offline that help them to achieve their goals. (This is true of bloggers as well and podcasters and any -ers that you want to toss in here, I’d wager.) We need community. And the depth of community we create determines our success. 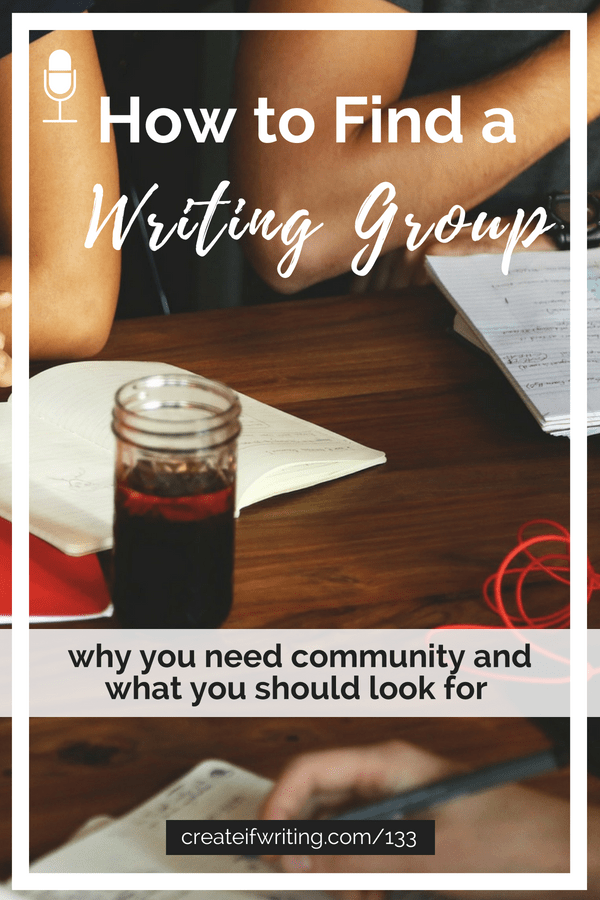 Listen to episode 133 – Why Writers Need Writing Groups and Community

Subscribe via Apple Podcasts or your favorite podcast app!

During the recent #cockygate, I saw a few big takeaways, no matter WHERE you fell on that whole mess. (If you don’t know what that is, check out a smart and funny summary and then some legal stuff.) Here are the big things I saw from that.

Writers in Community Get Inspired, But Don’t Copy

I think the impetus (from my understanding) of the author going for a trademark was the fact that other people were copying her books in title and cover because they were successful.

Y’ALL. Do your own thing! Pay attention to what other people are doing. Watch them. Study them. (I know I do!) Then apply what you learn to your OWN WAY OF DOING THINGS. You do you.

Trademarking a common word sets a dangerous precedent. Sending emails about changing things like book titles and covers (which isn’t always a small expense) is NOT helping the community.

While I think the trademark action wasn’t the best for the community, neither was the community turning into a mob a good thing. I never like the mob mentality. Often it acts first and thinks later. I think the backlash to #cockygate was ugly. Surprising? No. But ugly, VERY much.

Should writers band together? YES. Marie Force is a great example, being at the helm of the Indie Author Support Network, which is banding indie authors together. (Note: Don’t confuse this with the Alliance of Independent Authors, another great indie organization!) The goal is to be able to reach out to companies like iBooks and Amazon with concerns, bringing the force of over 1000 authors with them. That isn’t a mob. It’s a mobilized, logical force.

When we turn on each other (even thought I totally get it sometimes), we aren’t helping the community as a whole. What if that same mob turned on YOU? Think about that before you join an emotionally charged group.

HOW TO FIND GOOD WRITING GROUPS AND COMMUNITIES

I would recommend that you find writing groups of various sizes. I have a few one-on-one people that I go to for the most personal and vulnerable of things. I’m in a few larger groups of a few hundred and then some larger of a few thousand. I’m missing the in-between of one to hundreds, which I think is super important. I’d love to have a group of about ten or less. These sizes allow for different trust factors.

But what should you look for in writing groups?

You should absolutely look for groups where people:

I’ve seen writing groups that fail at one or several of these, and they are a  MESS. If you have an honest group that isn’t kind and doesn’t have your best interest at heart, it’s horrible. If you have a group that is kind but doesn’t know what they are talking about, that helps NO ONE. I think these are the four most important things.

Here are a few of my favorite writing groups, with a bit about each.

Create If Writing – Yup, this is my group. And it’s epic. We talk about platform-building, our writing, blogging, social media, and have share weekends. Oh, and we celebrate small wins. Big wins too. But small wins matter.

I Am a Writer – This group connects to Write Now, the podcast from Sarah Werner. She is kind and generous and cultivates community that is so helpful!

20Booksto50K – This is a behemoth group and may be intimidating. Especially if you are new and drop in just to ask questions that have been answered in full a LOT. Go listen. Read. Watch.

If you want more on Facebook groups and why they are particularly important and what is changing about them, read this post on what you need to know.

Do you have advice for finding great writing groups? Or have a writing group I should add to the list? Leave a comment to let me know!